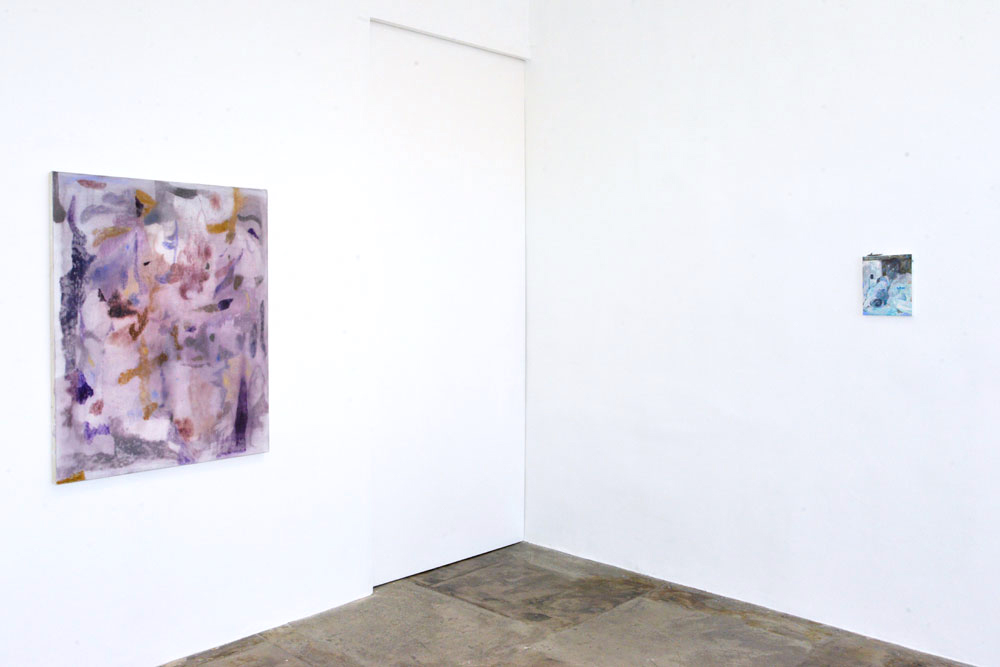 Big Pictures Los Angeles is pleased to present From a Corner the Sound of a Small Bird, a two-person exhibition featuring Maja Ruznic and Joshua Hagler. An opening reception will be held Saturday, September 7th from 7:00pm – 10:00pm.

The title emerges from the poem “The Room,” by W.S. Merwin, who died this past March. The poem first appeared in his Pulitzer-Prize-winning collection “The Lice” in 1967, a response, in part, to the Vietnam War, and more generally, to the “peculiar spiritual anguish” of his time.

This exhibition marks the second occasion in which Hagler and Ruznic have exhibited together, the first in 2014 in San Francisco, where the pair first met. At around that time, they moved to Los Angeles, where they lived and worked until late 2017, relocating once again to rural New Mexico where they now live.

Since relocating, there has been a pronounced creative shift for both, evident to those familiar with their decade-long careers.  Of the effects of rural life in the desert, most important to Ruznic and Hagler is the sense of permission it gives to think about time and space in more expansive terms.  If one might think living in a slower, less economically vibrant environment has the effect of removing one from the world, the artists will attest to a sense of finding themselves firmly on its ground, where time and space are irreducibly present. As a result, the work is less concerned with contemporariness and instead values less popular ideas of eternal time and sacred space.

“The Room” is one of Merwin’s sparest poems, and could be interpreted as situated in a profound paradox relating both to the inevitability of suffering and loss and to the poetic spirit which might grow from it.  With this in mind, the couple have organized an exhibition of modest scale, quieter than usual, and which acknowledges loss as it has pertained to those in their lives and in the larger world.  Hagler and Ruznic regard those they’ve lost as ancestors, as even with Merwin, with whom they might consult to give shape to the work.  Embedded in the work are the artists’ hopes to speak from underneath the louder, more divisive language of politics, and rather to try and recover a needed sense of remembrance, recognition, and poetry through the making itself.

Both artists’ work speak to this sense of absence and recovery, albeit in opposite ways.  It is through these opposite methods of making work that the artists also dialogue with each other.

In Ruznic’s case, it is important to restrain from committing to any particular form for as long as possible, and, indeed, the work has become more subtle in tonality over time, evoking the faintest presence though an arrangement of barely pigmented stains.  A collection of stains on a canvas might, over the course of a painting, seem to produce a foot, an ear, finally, a sidelong glance, happening as if by itself, and informing the artist that this figure is in need of the company of another, and so the process goes as the canvas populates.  Just as the viewer might wonder who this figure, this certain presence, precisely is and how she arrived on the scene, so too might Ruznic’s figures seem to wonder the very same thing.  For just a moment ago, wasn’t she hiding among the trees, waiting for a safe moment to come out?

And if Ruznic’s work can be said to evoke a minimum appearance from absence, Hagler’s work might be the result of the maximum erosion that can occur before a total loss of recognition.  The imagery in a painting, for Hagler, is never a total invention, but rather a response to imagery long existing in the world already, and an anxious negotiation of how to deal with it.  Loss is built into the process, which tells a story outside the frame.  For this two-person exhibition, some of the imagery to which Hagler responds, is, in fact, Ruznic’s, as when the two wake up in the morning, and one finds their cat on his chest and hands it over to the next, so as to put pants on and make the coffee.

I think all this is somewhere in myself

The cold room unlit before dawn

Containing a stillness such as attends death

And from a corner the sounds of a small bird trying

You would say it was dying it is immortal